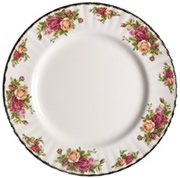 Dinnerware pieces are among some of the first entirely man-made objects created, and nearly every primitive society produced dinnerware in some form. In addition to their use as eating utensils, these early pieces were used for carrying water, cooking, or the storage of food. The Chinese are credited with inventing what we know as dinnerware today, and with the development of processes over thousands of years that eventually led to the mixing of clay and stone to produce the first true porcelain pieces. More development led to the discovery of fireable clear and colored glazes, as well as individualized decoration. These dinnerware pieces were migrated to Europe via established trade routes with the west where they became highly prized items. Formulae and production processes used to produce dinnerware in Europe were continually developed and refined, eventually yielding the fine patterns and dinnerware sets that we know today.

Today's dinnerware owes much of its development to advances made in body and glaze formulas, decorative methods, and manufacturing techniques that occurred in England's Staffordshire pottery district between 1750 and 1850. English designers and manufacturers set the dinnerware quality standards for the rest of the world, and they are still the leaders in this field today. 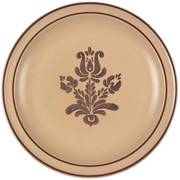 Dinnerware (ceramic) is produced in various categories using a mixture of raw materials, including different types and grades of clay, stone, glass, and bone ash. These materials, combined with standardized firing temperatures, produce dinnerware types in different categories that include pottery and earthenware, stoneware, porcelain, and bone china.

Pottery is made from lower grade clay, is fired at relatively low temperatures, and does not become vitrified (hard and "glassy") or translucent after firing. For thousands of years, people have created pottery by molding pots, bowls, plates, and pitchers from clay and then baking them. Over the years pottery has come to be known by a number of names, including earthenware, semi-porcelain, graniteware, and ironstone. Unfinished pottery is typically somewhat porous with a thick, opaque, clay body. Pottery dinnerware patterns carried at Replacements include Village by Pfaltzgraff, America by Pfaltzgraff, Fruit by Stangl, Ultrastone-Country Blue by Mikasa, Blue Nordic by J&G Meakin, and thousands of others. Earthenware is similar to pottery but it is usually more durable and suitable for everyday use. Replacements also carries a large selection of earthenware patterns including Fiestaware by Homer Laughlin, Desert Rose by Franciscan, and Apple by Franciscan.

Stoneware is very hard and dense, and stoneware dinnerware sets, in undecorated form, vary in color from brown to blue-gray. Stoneware is fired at very high temperatures and has a somewhat vitrified body that is water-resistant and more durable than pottery. A few of the thousands of stoneware dinnerware patterns stocked at Replacements includes Whole Wheat by Mikasa, Heartland by International, and Marmalade by International. 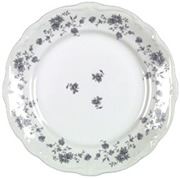 Porcelain dinnerware is made from very high quality clay and is vitreous, nonporous, and in most cases translucent. The commonly used generic term for dinnerware, "china", comes from the fact that porcelain was first made in China. It is believed that porcelain was first developed in China during the 9th century. During the early 1700’s the process used to make porcelain found its way to the European continent. There are two types of porcelain, soft paste and hard paste. Soft paste porcelain combines white clay and ground glass and is fired at a lower temperature than hard paste porcelain. Hard paste porcelain is made from china stone and kaolin, and is fired at higher temperatures. The wide variety of porcelain dinnerware patterns carried at Replacements includes Blue Garland by Johann Haviland, Holiday by Lenox, Weatherly by Lenox, Autumn by Lenox, Sunnyvale by Castleton, Richelieu by Hutschenreuther, Azalea by Noritake, and Brookdale by Lenox. 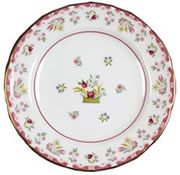 Bone china dinnerware includes the use of highly refined clay and bone ash in its production. Bone china came into being as a result of a number of experiments performed by English china manufacturers in the mid-eighteenth century. The English were seeking a process by which they could achieve “vitrification” during dinnerware production. When vitrification is achieved during the firing process, the clay and feldspar bond and become one material. Unfortunately, the English were unable to get their kilns hot enough to achieve vitrification. Therefore, they sought to lower the required temperature at which vitirification would take place. By adding animal bone ash to the china compound, they were able to achieve vitrification at lower temperatures. Josiah Spode was the first English producer to achieve success with this new process, and the result was a form of china that was both translucent and durable. Bone china offers advantages over porcelain including being whiter in color, lighter in weight, and less brittle. A wider range of colors can also be used in its decoration. Some of the thousands of bone china dinnerware patterns at Replacements include Old Country Roses by Royal Albert, Pembroke, Gold Trim by Aynsley, Charnwood by Wedgwood, Florentine by Wedgwood, Bianca by Wedgwood, Golden Rose by Royal Chelsea, and Autumn Roses by Royal Albert.