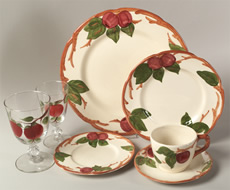 Gladding, McBean & Co., began production of Franciscan dinnerware in 1934 at their plant in Glendale, California. Gladding, McBean & Co. formed in 1875 to produce sewer tile for the then expanding American West. Over the years they acquired several regional potteries and expanded their product lines several times to include roof tile, decorative art tiles, garden pottery, and art pottery.

Originally, the dinnerware line was sold as Franciscan Pottery and included solidly colored, bright earthenware in the casual style of Mexican folk pottery. This informal tableware was a warm friendly note in the midst of the Great Depression and the company selection of the Franciscan name, an allusion to Franciscan monks, further played into the Southwest imagery. 1930's Franciscan patterns, with names like El Patio, Coronado and Montecito, enhanced the California casual style and sold well. The name was altered to Franciscan Ware in the late 1930's to allow for a more upscale and broader image. Shortly thereafter, the company introduced raised relief, handpainted patterns that proved hugely successful. Two of these, Franciscan Apple (1940) and Franciscan Desert Rose (1941) are the only continuously produced Franciscan patterns, and remain in production today. Franciscan Desert Rose has become the most sold American dinnerware of all time. Other handpainted patterns such as Ivy, October and Fresh Fruit became quite popular during this time. One of the most desirable and difficult to find Franciscan patterns for collectors is Wildflower, a handpainted and many colored tribute to the flora of the American west. It was produced for no more than three years.

The entry of Gladding, McBean & Co into the dinnerware market was made possible in part by the arrival of Frederic and Mary Grant. Frederic was a ceramics engineer and previously had been president of the Weller pottery in Ohio. Mary was a successful stylist whose designs drove the first two decades of production at Franciscan. A number of other artists created designs and modeled shapes but the Grants worked together in their successful control of Franciscan products.

Some of the best of the Grants influences can be seen in their Metropolitan Museum of Art in New York's Thirteenth Exhibition of Contemporary American Industrial Art in 1934. Two objects designed by the Grants appeared in this exhibition as Gladding, McBean products: a large satin gray bowl and a lemon yellow vase. In the same exhibition of 1940 "a bowl and platter designed by Mary K. Grant: made by Gladding, McBean & Co." was again honored. This acclaim for Mary's work continued in 1951 when an exhibition called Good Design by the Museum of Modern Art, New York selected the Encanto shape for exhibition. Encanto shapes went into production as fine china and sold with great success throughout the 1950's. Extensive advertising and numerous new patterns on the shape kept the classic shapes alive and vital in the market place.

Franciscan introduced their Fine China line in 1942. This was marketed as Franciscan Masterpiece China after 1958 and production continued in the United States until 1978. The Franciscan name appeared on fine china from around the world after that time, but will bear a backstamp indicating the country in which it was produced. 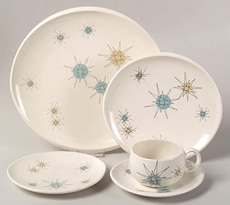 The 1950s marked the departure of the Grants and the arrival of other design influences for Franciscan. The Eclipse "American Modern" shaped patterns of 1954 included Starburst. Starburst would prove a radical departure from prior tradition and used an irregular shape and abstract radiant stars resulting in a very modern earthenware pattern. Today it is collected as some of the best design work from the Modern 1950's.

By the 1960's and 1970's "casual dinnerware" made of earthenware was very popular and surpassed the sales of fine china of all types. Franciscan followed this trend, successfully marketing various patterns on their Hacienda shape in '60's colors of harvest gold and avocado green. In the '70's informal earthenware lines such as Franciscan Madeira and Picnic rose to popularity.

Franciscan survived the competitive ceramics market and the entry of plastic onto Americans dinner tables by having production of china made in Japan beginning in 1960. The Japanese Cosmopolitan fine china and earthenware Whitestone lines were marked changes for this historically California based producer.

At the pinnacle of its fame, Franciscan pieces were purchased by some of America’s most famous families. Noteworthy are the 1961 order by Jacqueline Kennedy for Masterpieces China to be used on Air Force One and the 1969 selection by the Richard Nixons of Franciscan Masterpieces China for service aboard the Presidential yacht. Other orders for special services for royalty from around the world were also filled.

A series of mergers and sales contributed to the closure of the American Franciscan factory in 1984. In 1962, Franciscan became part of a large ceramic giant, International Pipe and Ceramics Corporation, known as INTERPACE. In 1979 Josiah Wedgwood & Sons, LTD of England acquired Franciscan from INTERPACE, and renamed the company Franciscan Ceramics, Inc. American production of Franciscan Ware ceased in 1984, following the announcement to relocate all Franciscan production to England. In the year 2000 "Johnson Brothers/Franciscan, a member of the Wedgwood Group" markets Franciscan china in the U.S. from production facilities around the world.