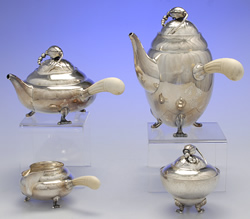 Georg Jensen was once described by The New York Herald Tribune as “the greatest silversmith of the past 300 years.” Jensen was a true innovator, a sculptor-turned-silversmith who chose, as French art critic Emile Sedeyn said, “to make our useful things beautiful.” More than a hundred years after they were first introduced, many of his designs remain extremely popular and continue to attract the interest of collectors worldwide.

Jensen’s desire to combine utility with art is based in the Arts and Crafts movement, which was gaining momentum in Denmark as Jensen began his silversmith career. Characterized by organic, nature-inspired motifs and stylized, flowing forms, Arts and Crafts was a response to the Industrial Revolution, which inundated the market with cheap, utilitarian products that lacked the quality, craftsmanship, and artistry of handcrafted works. Many artists in the movement felt responsible for bringing affordable elements of beauty to everyday life, and Jensen was no different in this regard. His desire to marry style and utility can be seen in his earliest designs (like the Blossom pattern), in which he married natural design elements like flowers, fruit, leaves, and birds to functional, everyday items. 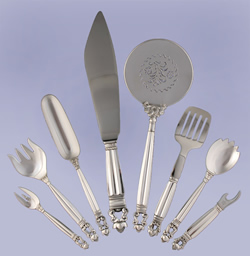 Jensen’s fascination with nature most likely stemmed from the rural surroundings of his childhood home in Raadvad, Denmark. His artistic talent was evident at a young age, when he would make sculptures from the clay found in the marshlands near his home. By the time Jensen was thirteen years old, he was working as an apprentice golder in the same cutlery factory where his father worked. Being cognizant of his artistic aptitude, Jensen’s parents moved to Copenhagen, where Jensen’s talents would have the opportunity to flourish. There, Jensen apprenticed with a goldsmith, and worked on sculpting in his spare time. After Jensen showed one of his sculptures to a professor at the nearby Royal Academy of Art, the professor was impressed, and promptly helped Jensen gain admittance to the Academy. While Jensen was attending school there, his sculpture, “The Harvester,” was exhibited at the Charlottenborg Spring Exhibit, and received critical acclaim. By this time, Jensen had completed his goldsmith apprenticeship, but decided to pursue a career as a sculptor. Jensen’s future as a sculptor was not to be, however, and when his subsequent sculptures failed to attract attention, a defeated and impoverished Jensen partnered with a friend to sell their ceramic creations. The venture was a failure, and Jensen turned to silversmithing in order to provide for his family.

In 1904, Jensen opened his own workshop, where he first produced jewelry, then later hollowware and flatware. The sign outside read, “Georg Jensen Sculptor, Silversmith,” an indication that Jensen still regarded himself as a sculptor first and foremost. But with a new focus on using silver as his sculpting medium, Jensen had finally found a marketable way to channel his creative energy. After several successful museum exhibitions of his jewelry, and steady sales from his small shop, Jensen began to get a reputation for producing handcrafted, elegant items that were both functional and aesthetic.

Jensen decided to expand his production by collaborating with other artists and craftsmen, most of whom shared Jensen’s conviction that the “ornament must never dominate.” Designers such as Johan Rohde, Harald Neilsen, Sigvard Bernadotte, Gunorph Albertus, and Henning Koppel created some of the most cutting edge silver designs of the twentieth century ( Acorn, Pyramid, Bernadotte, Cactus, and Caravelle, respectively), and their contributions became many of Jensen’s most popular patterns. Jensen was particularly interested in supporting his designers, and making sure they received credit for their work.

In 1915, newspaper magnate William Randolph Hearst was so impressed with Jensen’s exhibit at the Panama-Pacific International Exposition that he bought every item on display, bringing attention to Jensen’s work from American buyers. By 1918, the company was appointed purveyor to the Royal Swedish Court, and by the 1920s, Jensen employed as many as 300 craftsmen. Today, Georg Jensen, Inc. is owned by Royal Copenhagen, and continues its legacy of excellence.

By the time of Jensen’s death in 1935, he was already regarded as the “father of Scandinavian Silver.” On the occasion of his 60th birthday, Jensen remarked, “Silver is the best material we have. The character of silver is satisfactorily obstinate, it has to be conquered – and then it has the wonderful moonlight luster. [It] can seem like twilight, or, when it dews over, like ground mist rising.”