The story of Haviland China is one of personal journey as well as product history. Throughout the 1830’s, David Haviland was a partner in D.G. & D. Haviland Trading Co. The store, situated in New York City, was an importer of English and French tableware. In 1841, David, his wife Mary, and their son Charles, set sail for Limoges, France in search of a place that would be ideal to build his own china factory. Limoges, a city 200 miles southeast of Paris, was world renowned for its production of fine porcelain. Kaolin, a cream-colored clay capable of creating superior quality porcelain, was discovered in the region of Limoges in 1770. After arriving and settling with friends in Limoges, the Haviland’s second child, Theodore, was born.

David Haviland, intent on producing the world’s finest china, began working to obtain permission to build a state-of-the-art china factory. The French government issued the necessary permits to Haviland in 1853. Within two years, David’s keen business sense and American ingenuity aided him in establishing one of the world’s most advanced china producing facilities. Tradition maintained that whiteware blanks were to be produced in Limoges and then sent to the artist’s guilds of Paris to be decorated. Haviland and Co. was the first of the Limoges china manufacturers to produce blank forms and then decorate these forms in the same location. Although Haviland’s technique saved time and money, his behavior was considered radical. Many protests were staged in and around the Haviland factory. To protect themselves against the rioting artists and craftsmen of rival firms, Haviland’s employees had to travel to the factory in groups. 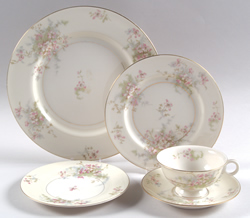 David Haviland successfully weathered such early hardships though. Within a few years, the small factory came to be respected throughout France. By 1865, Haviland & Co. was producing china using traditional English and American shapes and designs. The floral designs and heavy structure of French china tended to be too exaggerated and busy for the English or American lady’s table. Haviland’s earliest patterns consisted of understated multicolored floral designs that were painted on delicate handcrafted blanks.

Throughout the 1860’s and 1870’s, David Haviland aggressively built his china empire. In 1865, David Haviland appointed his oldest son, Charles, to manage his Limoges facilities. The original factory had grown to become a plaza consisting of several factories, decorating facilities, and warehouses. David requested that Theodore move to the United States to market the company’s productions and continue working with the D.G. & D. Haviland firm. It was during this time that Haviland developed the blank for its most popular pattern, Ranson. Delicately crafted and light in weight, the new blank was easily decorated and became an immediate sales success.

David, Charles, and Theodore each held a deep appreciation for art. In 1872, Charles opened the Auteuil Studio. Situated in Paris, the Auteuil Studio entertained many great artists of the day. In France, the Impressionist’s art movement had just become vogue. Under the management of Felix Brocquemond, the studio entertained such artists as Manet, Monet, and the Damousse brothers. Known as the “French School,” these artists greatly influenced Haviland’s floral designs. Impressionist pieces are rare and extremely valuable. Brocquemond, a renowned ceramics decorator, was able to help the company in developing many new methods by which china could be formed and decorated. It is during this time that Haviland and Co. received its most prestigious request.

In 1879, the wife of President Rutherford B. Hayes decided to replace the existing White House china. Seeking a unique china service that reflected the spirit and nature of America, Mrs. Hayes requested a multi-motif dinner service that would be used to illustrate America’s various flora and fauna. Theodore Davis, an illustrator for Harper’s Weekly and friend of Mr. and Mrs. Hayes, was selected to produce the images for each piece. In June of 1880, the dinner service arrived at the White House. Accompanying the china, was a book published by Haviland and Co. entitled The White House Porcelain Service. Mrs. Davis’s sent Theordore Haviland a series of charming letters explaining each of her husband’s paintings. These letters inspired Theodore to write a book to be sent with the service. The final cost of the “Hayes Service,” was $3120. Although the production of the “Hayes Service” was tedious, time consuming, and suffered a series of design set backs, the final product was pleasing to both the White House and Haviland and Co. The service and its accompanying book are archived at the Smithsonian Institute.

Despite the growth and success of Haviland and Co., the 1880’s and 1890’s proved to be a turning point for the company. David Haviland died in 1879. Citing creative differences, Charles and Theodore decided to officially dissolve their joint ownership of Haviland and Co. in 1891. Charles retained leadership of the original company and Theodore opened Theodore Haviland, Limoges. The two firms became archrivals. Charles marketed Haviland and Co.’s product under the slogan, “Buy genuine Haviland.” Theodore petitioned many of the artists from the Auteil Studio to come and work for Theodore Haviland, Limoges.

At the turn of the century, each firm continued struggling bitterly over control of the market. Theordore marketed his china by agreeing to print the name of the seller on the back of each of the pieces. This service was provided to retailers who placed large orders. A price war ensued between the two companies. A 1910 Macy’s catalogue cites Haviland and Co. as offering a 56-piece dinner set for $20. Theodore Haviland, Limoges offered a 101-piece set of “the same quality,” for the same price. Theodore’s salesmanship and aggressive marketing strategies helped his company to grow and succeed.

Soon after the end of World War I, a series of calamities beset Haviland and Co. Charles Haviland died in 1921. In 1926 and 1929, kiln fires destroyed part of the Haviland and Co.’s factory and several storage warehouses. Under the financial burden of the 1929 stock market crash, Haviland and Co. was unable to rebuild its facilities. The company closed its doors in 1931.

Throughout the years, the beauty of Haviland’s china has captivated the hearts of collectors. One such collector, Arlene Schleiger, produced a 4-volume Haviland identification guide between the years of 1950 and 1970. Arlene painstakingly researched as many collectible Haviland patterns as possible. Richard, Arlene’s son, produced all of the illustrations for the books. Each year, while in college, he would come home during summer break and draw the images for his mother’s book. Schleiger’s guide contained more than 800 illustrations and was immensely popular among Haviland collectors. Because of Schlieger’s research, many Haviland patterns are simply identified with Schlieger’s name and a number. For example, Ranson is also known as Schleiger No. 1.

In 1972, the Haviland’s retired from management of their family business. It is estimated that Haviland has produced more than 60,000 patterns. Many of these patterns are available through Replacements Ltd. Haviland china remains immensely collectible and the Haviland name remains forever connected to fine American and French dinnerware.