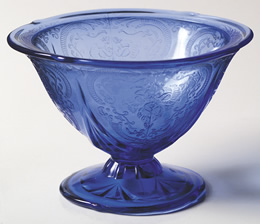 The story of Hazel Atlas begins in 1885, when Charles Brady and C.H. Tallman founded the Hazel Company in Wheeling, West Virginia. Seeing an unfilled niche in the marketplace, Brady and Tallman’s fledgling company specialized in producing glass inserts for canning jar lids. Within a year, Brady and Tallman opened a plant in Washington, Pennsylvania to take advantage of the natural gas and other resources available there. With this new production facility, the Hazel Company was able to diversify its product line, which expanded to include lamp bases and chimneys, ointment jars, salve boxes, and molasses cans. Many of these products were made of opal glass – typically referred to as “milk glass” today – as opposed to the more common flint or amber glass most other glass companies were using at the time. In 1894, Brady and several other partners started the Atlas Glass Company, a separate corporation devoted solely to manufacturing fruit jars. Meanwhile, the Hazel Company continued to expand its product line, becoming the first producer of glass mayonnaise, baby food, and pickle jars.

The Hazel Company was expanding at a time when traditional hand-blowing production techniques were being replaced by new technology that allowed glassmakers to mass produce their products quickly and cheaply. These cheaper, more uniform products were much better suited for the distribution of foods, beverages, and cosmetics. In 1904, Michael Owens single-handedly revolutionized the glassware industry with his new bottle-making machine that employed vacuum technology to churn out bottles cheaply and quickly (up to four bottles per second!). The Hazel Company was innovative in its own right. Brady was always on the lookout for talented inventors, and under his guidance, Hazel began making pressed glass tumblers using a newly developed “Merry-Go-Round” machine. The Atlas Glass Company and Hazel Company combined in 1902 to form Hazel Atlas. The merged company expanded its now sizable product line to include tableware – a smart move, since the company’s mold-etched, machine-made tableware patterns (like Royal Lace) helped them weather the Great Depression. At its height, Hazel Atlas employed 5,000 employees, and was the largest glass-container maker in the world.