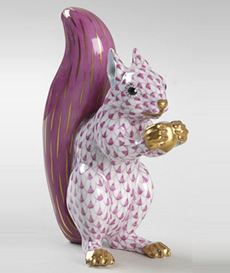 The original Herend factory was established in Hungary by Vince Stingl in 1826. The firm focused primarily on the production of stoneware, but Stingl also (unsuccessfully) experimented with methods to produce fine porcelain. By 1839, Stingl was bankrupt, and ownership of Herend transferred to Mor Fischer. Fischer planned to revitalize the factory by producing replacement and completion pieces for other fine china patterns that had ceased production. But first, Fischer had to find a successful formula for producing high-quality porcelain that would rival fine porcelain from regions like Sevres, Meissen, Vienna, and the Far East. 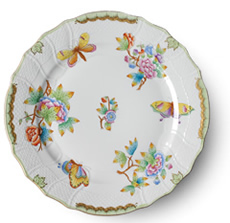 After much experimentation, Fischer was successful, and by the first Hungarian industrial exhibition in 1842, Herend products were described as capable of “satisfying the demands of any princely table.” Herend porcelain continued to garner praise, and the company’s products were recognized for their excellence at the Vienna Exhibition of 1845, the Great Exhibition in London in 1851, the New York World Exhibition in 1853, and the Paris Exhibition of 1855. With such high acclaim, Herend porcelain was soon gracing the tables of Europe’s royal families and aristocracy. The renowned Rothschild Bird pattern was created by Herend for the Rothschild family (who rose to power via their European banking and finance houses in the late eighteenth century), and illustrates an interesting bit of Rothschild family lore. As one version of the story goes, Baroness Rothschild couldn’t find her pearl necklace after losing it in the garden one day. Several days later, her gardener noticed a pair of birds playing with something shiny in a tree, and, upon further investigation, discovered it was the Baroness’s pearl necklace! Another ringing endorsement for Herend came from Queen Victoria, who, after seeing a Herend display at the Great Exhibition in London in 1851, ordered a Herend table service for Windsor Castle (this pattern continues to bear her name).

In addition to its popular dinnerware patterns, Herend also became known for their exquisite figurines adorned with a now-iconic "fishnet” design. Herend figurines were first produced in 1858, but became most popular following the Great Depression, when Herend increased production as a way to offer affordable ornamental items for the average consumer. During this period, Herend created a porcelain figural collection that included designs of more than 150 birds and 200 animals, in a variety of sizes, to accommodate most budgets. 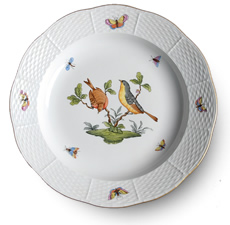 The company faced more challenges during WWII, when the conflict made it impossible to import the raw materials needed to produce high-quality porcelain. When the Iron Curtain descended over Eastern Europe at the end of the war, Herend was nationalized by the Communist government. Although the company experimented with several domestic clays to attempt to produce the wares for which it had become so famous, the resulting products were deemed suitable for domestic markets only. Eventually a deal was reached with Communist authorities, and Herend was able to import the famous clay of Limoges, France, which enabled production of the highest quality porcelain designs. In 1993, Herend was once again privatized, with 75% of the company’s ownership transferred to its management and workers. Today, Herend is the biggest porcelain manufacturer in Europe.