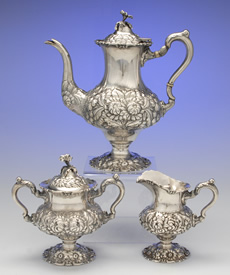 Charles Stieff founded Stieff Silver in 1892. His first factory and retail store resided in downtown Baltimore, Maryland. Stieff, like his peer Samuel Kirk, utilized an ancient style of silver design known as "repousse", in which pattern design was added by applying force to the inner wall of silver pieces and "popping out" the desired design. A very disciplined tradesman, Charles Stieff also firmly believed that all pieces marked sterling should be at least 92.5% fine silver. He took many steps to insure his product lived up to such standards.

Stieff Silver took advantage of the print medium for advertising. As early as 1900, the company placed ads in newspapers. In 1914, the company placed an ad in the "Baltimore Sunday Sun," and had an ad in every Sunday paper until the mid-seventies. Later, the company would join forces with several women's publications to help advertise their product. Gideon Stieff took his father's place at the helm of the company in 1914. With strong leadership and a clear vision for the future, he worked to expand sales nationally. In 1925, a new factory was built in beautiful Wyman Park. The company's philosophy was that it belonged in such a beautiful location because "high quality material such as sterling silver should be produced in a setting of the same beauty and perfection." 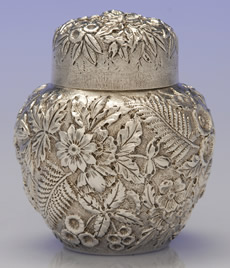 World War II saw Stieff, as many other manufacturers did, put aside normal operations and move into the production of war materials. The Stieff factory manufactured items including electronic assemblies, radar parts, and surgical instruments for the US Army and Navy. The end of the war brought "normalcy" back to Stieff, and the company's focus became silver once again. The year 1946 brought gift item plating to Stieff Silver. Everything from decorative ornaments to baby silver pieces was produced. Stieff's well-known pewter production began in 1950. The late sixties and seventies brought sweeping changes to Stieff Silver. The acquisition of several Baltimore silversmiths, including one of America's oldest silver manufacturers, Samuel Kirk and Son, proved to be a key acquisition for Stieff.

Samuel Kirk began his silver career as an apprentice to James Howell in Philadelphia. In 1815, at the age of 22, he partnered with John Smith to open a small shop in Baltimore, Maryland. The partnership was dissolved in 1820. Samuel's eldest son Henry then joined Samuel in 1846 and the company was renamed Samuel Kirk and Son silver. It was during this time, early in the company's history, that Kirk reintroduced America to an ancient style of silver craftsmanship known as "repousse." Samuel Kirk used the style of ancient craftsmen to create a unique and bold look that was solely his own. A good illustration of this style is showcased in the Kirk-Stieff pattern aptly named Repousse. Samuel's other children, Charles and Clarence Kirk, joined the family business in 1861 and 1863, respectively, and an "s" was added to Samuel Kirk and Sons. Less than seven years later, due to the economic slump created by the Civil War, Charles and Clarence left the business. Once more, the name reverted to Samuel Kirk and Son. Samuel worked diligently as the company's president until his death in 1872. 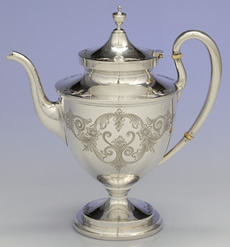 Henry operated alone until his son, Henry Jr., joined him in 1890. As word spread of the ornate beauty and durable quality of Kirk's products, the company gained momentum. The business prospered and sales were soaring. Many clients, both in Maryland and throughout the eastern United States, purchased vast amounts of Kirk products. The business became known as Samuel Kirk and Son Company. Old manufacturing processes were ended in favor of newer, more efficient machines. Then, just when it seemed the company was guaranteed success for the future, disaster struck.

The company experienced two fires that nearly destroyed all of its records. The first fire, set when leaking gasoline came into contact with a furnace, occurred in 1903. Less than one year later, before all of the damage from the first fire was repaired, the Great Fire of 1904 demolished the firm. Quick action on the part of the company's employees managed to save many vital records. A temporary location was utilized until renovations at the original factory could be completed.

Up until this point, the company had relied upon word of mouth to grow business. The turn of the century and improving business prospects necessitated the company's exploration of new mediums in which to get product information to the public. It was decided that print advertising would be the avenue of choice. Local newspaper ads were taken out in 1911 and 1912. Then the company's first catalog was produced in 1914, and in October 1937, the first national print ad appeared in House Beautiful and House and Garden magazines.

The Great Depression had little effect on the company, because it was so strongly positioned. During the war the company was reorganized to produce, among other things, surgical instruments and metal hardware. The early fifties brought a great demand for silver, and Kirk was barely able to meet demand. Unfortunately, the consumer market is sometimes volatile and demand began to slow quickly in the late 1950s. The mid-sixties silver market was considered to be "mature." Due to a failed management restructuring and the slowing silver market, Kirk Corporation (as it was then known) was forced to sell its assets. The Stieff Company, a neighboring competitor, bought the remaining stock under the proviso that all Kirk lines would remain intact.

In 1979, Stieff bought Samuel Kirk and Sons. Kirk-Stieff was an exciting combination of two of America's most influential silver firms. Still, little demand for silver product meant a slow growth in profits. In 1990, Lenox Incorporated acquired Kirk-Stieff and its subsidiaries. Most of the original Kirk and Stieff patterns are produced today under the Lenox banner. The eternal charm of patterns like Old Maryland, Repousse, and Stieff Rose continue to be popular choices for tabletop customers throughout the world.