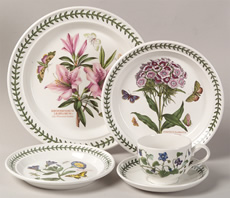 Portmeirion Potteries began as a small pottery decorating firm in 1960. In Stoke-on-Trent, England, Susan Williams-Ellis and her husband, Euan Cooper-Willis, purchased a small facility, the A.E. Gray Company. Here, Susan could pursue her hobby of decorating pottery. Susan had received a degree in the fine arts from Chelsea Polytechnic. Euan had studied math and statistics at Cambridge University. They lived self-sufficiently on a small farm during the early years of acquiring the A.E. Gray Company. During this time, Susan’s porcelain designs were sent to the gift shop of the village her father, Sir Clough Williams-Ellis, had founded in 1925. This picturesque village is located in North Wales. 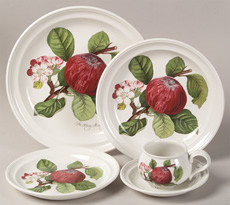 By 1961, Susan and her husband continued pursuing their dreams. They purchased a second pottery facility called Kirkham’s Ltd. Kirkham’s allowed for the design, molding, and decorating of pottery from one location. The A.E. Gray facilities only allowed for the decorating of pottery. Susan and Euan released their first successful pattern, called Totem, in 1961. The pattern was simple yet innovative. It soon became an immediate sales success.

Throughout the next decade, Susan and Euan continued producing simple patterns that were adorned with varying colors and simple shapes. Susan’s passion for art led her to pursue new avenues for creating and decorating pottery. By chance, Susan stumbled upon a nineteenth century botanical identification guide. She set to work designing a new series of china based on the pictures from the book. 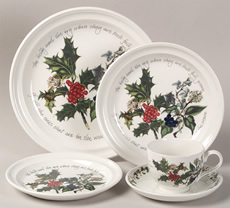 The Holly and The Ivy by Portmeirion

With the new designs, Portmeirion released Botanic Garden in 1972. This innovative and functional tableware soon became one of the most popular dinnerware designs to ever be created. Today, Botanic Garden now accounts for half of Portmeirion’s revenue. Using the same formula that had made Botanic Garden so popular, Portmeirion released Pomona. Functional and creative, Pomona is a pattern whose design features bold shapes that are adorned with fruit. Collectors soon fell in love with the unique designs being released from Portmeirion. With an ever-watchful eye, Susan would discontinue shapes and designs and work to create new pieces for each of her patterns. This is one of the reasons that Portmeirion’s patterns remain so popular today. Collectors love adding new pieces to their collection and carefully watching as other pieces are discontinued.

Today, Portmeirion remains one of the most popular pottery manufacturers in the world. Susan’s designs are easily spotted in the finest of retailers, including Replacements, Ltd. Susan and Euan’s eldest daughter, Anwyl Cooper-Willis has now become the Design Director of Portmeirion Potteries. With her mother, she closely monitors the design process at the Portmeirion factory and has a very hands-on approach to helping manage the company. In 1995, Anwyl Cooper-Willis designed another of Portmeirion’s popular designs, The Holy and the Ivy. Replacements, Ltd. carries a large variety of active and discontinued pieces and patterns from the Portmeirion company, including Botanic Garden, Pomona, The Holy and the Ivy, Christmas Story, Welsh Dresser, and Birds of Britain.