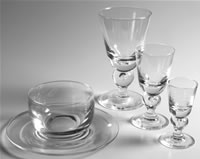 Steuben Glass is one of America’s most cherished producers of collectible crystal. Whether it is a Steuben vase, bowl, figurine, or sculpture, Steuben pieces are always well received gifts and quickly earn their right as family heirlooms. The company was founded in 1903 by an enterprising Englishman named Fredrick C. Carder and his partner Thomas G. Hawkes. Carder had been designing and producing glass for sometime in England for the firm Stevens and Williams. Hawkes owned a large glass cutting factory in Corning, New York and the designs that were there came from many sources.

It was Hawkes desire to have a factory that could both design and cut glass and when he learned of Carder’s skills, he asked him to come to New York and help open such a self-contained factory. Carder had recently been passed over for a promotion at Stevens and Williams, and decided, why not! Under Carder’s leadership, Steuben Glass Works prospered and developed several lines of very popular art glass. With Hawke’s capital investment and Carder’s unique sense of style, Steuben crystal was on its way to becoming an American legend. Carder was free to experiment with various glass making procedures and glassware colors, and he made the most of the opportunity.

Unfortunately, World War I caused the factory to be unable to acquire the raw materials necessary for producing the exceptional glass for which it had become known. The company was sold to Corning Glass Works and became known as the “Steuben Division.” Before its purchase, Steuben produced a variety of colored and iridescent art glasses. The sale to Corning resulted in the company focusing on clear pieces of crystal art, with the last known sale of Steuben colored glass occurring in 1943. 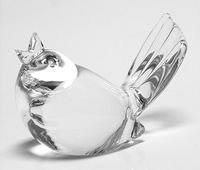 As the premier producer of exceptional American glass, Steuben took an artistic turn in the 1930s. Previously, the designers at Steuben had followed styles that were popular at retailers like Tiffany and Co. Beginning during the Art Deco movement, Steuben became known for its unique work in modernist themes in clear glass. The company produced a number of prestigious pieces during the 20th century. U.S. President Dwight Eisenhower and wife Mamie received an engraved Steuben bowl as a gift from his cabinet in 1954. The city of Atlanta gave Martin Luther King, Jr. an engraved Steuben bowl in 1965. President and Mrs. Johnson gave a Steuben bowl to Princess Beatrix of the Netherlands for her wedding to Claus Von Amsberg. As Chair of the Lincoln Center for the Arts, John D. Rockefeller III received a Steuben sculpture from David M Kaiser, President of the New York Philharmonic Orchestra. These examples of the stature of Steuben’s work pretty much speak for themselves.