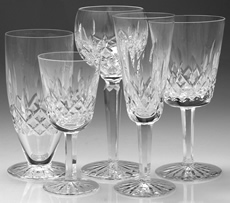 Waterford Crystal is one of the oldest manufacturers that Replacements, Ltd. represents, and one with which we have a long and successful relationship.

Back in 1990, Replacements, Ltd. founder and owner Bob Page began making quantities of world-renowned Waterford crystal available to our customers. One of the very first crystal patterns we offered was Waterford Lismore. Today, there are more than 58,000 individuals who have registered their interest in Waterford Lismore with Replacements, Ltd.! In fact, our company promotes more than 540 different patterns ?? including both active and discontinued Waterford crystal.

In past years we??ve hosted special events for some of Waterford Crystal??s most skilled artisans. In May 2009 John McGrath, master cutter with Waterford, was in our showroom to speak with customers and to sign a Waterford crystal cookie jar created especially for the event.  This was the sixth annual Waterford signing held at Replacements, Ltd., and our first exclusive Waterford retail event for all of North Carolina and South Carolina. 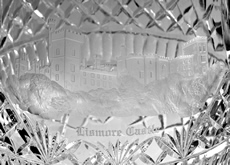 In September 2008 Replacements, Ltd. received for sale a Waterford Crystal Lismore urn, with lid, that stands 27 inches tall. It is a visually stunning piece! Its design includes crisscross, vertical, and starburst cuts on the lid, bowl, and foot that refract light into every color of the prism. Etched into the bowl of the urn is a gorgeous rendering of historic Lismore Castle, still standing in County Waterford, Ireland – a monastery in the early 7th century, visited by Henry II of England in 1171, and later acquired by Sir Walter Raleigh during the reign of Queen Elizabeth I.

The history of Waterford Crystal is a fascinating tale. In 1783 George and William Penrose opened the Flint Glass Works near the quay in the harbor town of Waterford, Ireland. Ironically, the Penrose brothers were not glass makers, but exporters. Although glassmaking had been popular throughout England and Ireland for a number of decades, high tax rates and acts of Parliament regarding trade had made it virtually impossible to operate a profitable glass-making firm. But an act of Parliament in 1780 opened free trade between England and the emerald isle. The Penroses believed they had an excellent opportunity to create a profitable export business under the new trade laws. They hired John Hill of Stourbridge Glass Works, Worcester, located in a renowned glass-making center in England??s West Midlands. The Penroses made Hill managing director, and brought in 50 skilled artisans from the European continent to begin production.

From the outset, the Penrose brothers demonstrated real business savvy and marketing acumen. They petitioned Parliament for government subsidies, promising that their business would employ 60 to 70 men, and were awarded the tidy sum of 10,000 pounds sterling. They immediately began to woo the aristocracy of Ireland and England as a market for their glassware, already known as ??Waterford crystal.?? In 1788 Waterford produced a crystal service as a gift to her Majesty, Charlotte Sophia, wife to King George III. The King and Queen were so charmed by the crystal that they ordered the set to be displayed at Cheltenham castle. Local newspaper reporters were thrilled by the sight of the Waterford design. In 1790 the Penrose brothers invited members of the aristocracy to tour their factory. Dignitaries in attendance included the Countess of Westmoreland, the Marquis and Marchioness of Waterford, and the Bishop of Ossory, who were delighted with the manufacturing process shown to them. 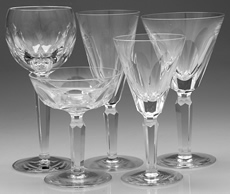 George and William Penrose and their managing director, John Hill, decided to sell the old Flint Glass Works in 1799. The factory was purchased by Jonathan Gatchell, an apprentice. Between 1800 and 1823, Waterford grew rapidly. Gatchell developed a plan by which his children would inherit and manage the glass works at Waterford. Also, Gatchell constructed a larger factory and hired 25 more employees. Gatchell??s son, George, inherited the factory in 1835, on his 21st birthday. The old Flint Glass Works would survive for another 16 years. New taxes were levied on the import and export of crystal under the unction of King George IV. Unable to find a partner with a considerable amount of capital, George Gatchell auctioned off Waterford??s Flint Glass Works. In 1851 the factory that produced Waterford crystal closed its doors and remained closed for a century.

To understand how and why Waterford??s Glass Works would be reopened in the 20th century, one must understand the legends that developed around the famed glass maker. Waterford had been the only successful manufacturer of crystal in Ireland. The company represented the positive elements of the Industrial Revolution to the Irish people. Flint Glass Work??s product was sought after by the aristocracies of Europe. After the company??s closing, many of the Irish people would struggle for independence from England. The struggles and civil wars in Ireland left the agrarian people of the island poor and disillusioned.

During the 19th century, nearly half of Ireland??s population would emigrate to the United States. With them, they took stories of Ireland??s famed glassmaker, Waterford. Until this point in the history of glass making, no backstamps or ??signatures?? were used on crystal. As a result, it became vogue for Americans to refer to ??crystal?? as ??Waterford.?? The Irish immigrants in America told stories of Waterford crystal having the clearest ring of all glass. At dinner parties, Americans began tapping their crystal with their silver to hear what type of ring it would produce. Another legend that developed around Waterford crystal was that ??it was so clear, that it was blue.?? Consequently, blue glassware in the United States sometimes came to be called ??Waterford.?? 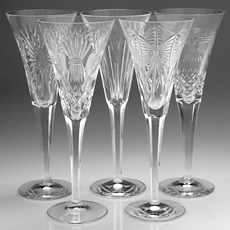 During the 1930s, Ireland set out to develop a modern industrial society. To build industry and to slow emigration, Ireland began inviting wealthy speculators into the country. A group of Belgians, led by two Irishmen, Joseph McGrath and Joseph Griffin, invested in the nearly defunct Irish Bottle Co. The partners opened what they called a ??pilot factory.?? This factory, in Ballytruckle, successfully weathered the Great Depression as well as World War II. By 1950 McGrath, Griffin, and Bernard Fitzpatrick, an important shareholder in the company, decided to revive the Waterford crystal tradition.

The Irish state remained poor, with an unskilled labor force. The managing partners, like the Penroses before them, went to the European continent to find skilled labor for their new endeavor. Recruiting skilled labor on the continent was not hard - full ??displacement camps?? were scattered throughout Europe. These camps had been set up following the end of WWII for those whose homes had been destroyed in the war or for people who had survived the labor and death camps of the Nazis. Famed for their glassblowers and cutters, Czechoslovakia and the Sudetenland had been ravaged by the war. Skilled glass artisans, many impoverished and near starvation, could be found for the asking. 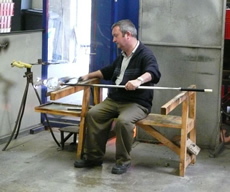 McGrath and Griffin returned to Ireland, bringing with them 30 skilled glass blowers and cutters. With these craftsmen they began an apprentice program in Ireland like none before it. The 30 European craftsmen began to train native Irishmen in the art of glassmaking. Although these displaced European artisans remained in Ireland for many years, eventually all but one returned to the continent. To replace the ??pilot?? operation in Ballytruckle, a new factory was built in Johnstown, Waterford County. In 1951, exactly 100 years to the day that the old Flint Glass Works were closed, the new factory opened ?? producing legendary Waterford crystal.

Today, Waterford employs more than 3,000 people. Their business remains steeped in tradition. The apprenticeship program that was instituted to ensure the employment of native Irishmen remains in place. Waterford crystal stemware graces dining tables around the world. Waterford crystal chandeliers hang in Windsor Castle, Westminster Abbey, and the Kennedy Center in Washington, DC.

The ??suites,?? or patterns, of crystal made by Waterford reflect Irish spirit and history. Many of Waterford??s beautiful pattern names are Irish. Alana, first produced in 1952, is a girl??s name meaning ??darling.?? Sheila derives from the Anglo-Norman name, ??Caecelia,?? or ??Cecelia.?? Colleen, introduced in 1968, is the Irish word for ??young girl.?? In 1968 Waterford produced Ashling . ??Ashling?? is an Irish girl??s name meaning ??dream of beauty.??

Other patterns introduced by Waterford celebrate the history and landscape of Ireland. Lismore, first produced in 1957, celebrates Lismore Castle, Waterford County (see Lismore urn, with lid, above). Powerscourt was first produced in 1969 in celebration of the Powerscourt Gardens, County Wicklow, famed for their collection of Asian botanicals. Kenmare, introduced in 1968, is reminiscent of the seaside town Kenmare, Kerry County. Among the most popular items at Replacements, Ltd. during the holidays are the fluted champagne glasses in Waterford Crystal??s multi-motif Millennium Series pattern. Millennium includes individual designs for ??Happiness,?? ??Love,?? ??Health,?? ??Prosperity,?? and ??Peace?? – ideal for toasting in the New Year! All these patterns contribute to the enduring legend of Waterford crystal, recognized world-wide for its beauty and craftsmanship.