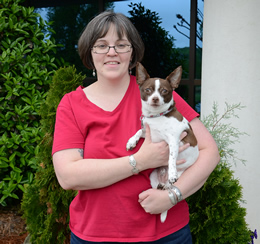 Our featured pet this month is "Buster," an adorable seven-year-old Chihuahua who belongs to Julie Robbins, a Designer at Replacements, Ltd. “I got Buster as a puppy from a local breeder when I was looking to add an additional dog to my family,” Julie said. “He walked into my home and my large mutt, ‘Harvey,’ immediately fell in love with him. Harvey took charge of nursemaid duties, trying to feed, warm, and entertain his new, tiny puppy. The two were inseparable for nearly eight years, often sleeping curled up next to each other. Because of Harvey, Buster grew into a sweet, affectionate, and calm dog, though he does require a certain level of daily TLC.”

Sadly, Harvey passed away in January of 2015, and Buster has mourned him deeply. “I started bringing Buster to work to alleviate his loneliness, and he is loving it!” Julie said. “He thoroughly enjoys the attention he gets from other employees, and he loves lying in my lap for the last hour of the day while I work at my desk.” Recently, Julie adopted a Lab mix named “Hiro” from the Guilford County animal shelter to be Buster’s new bodyguard. Julie said, “I look forward to bringing the two of them to Replacements together one day – once Buster has finished ‘training’ him!”

When asked what she most likes about working at Replacements and the company’s pet-friendly policy, Julie said, “The Replacements’ pet policy is wonderful - allowing me to care for and keep an eye on my pet during my workday is such a blessing. It also brings me closer to my coworkers and our customers in a different way, giving them insight into my life outside of work. As a company, Replacements strives for just these kinds of connections, which is what makes Replacements a great place to work.”